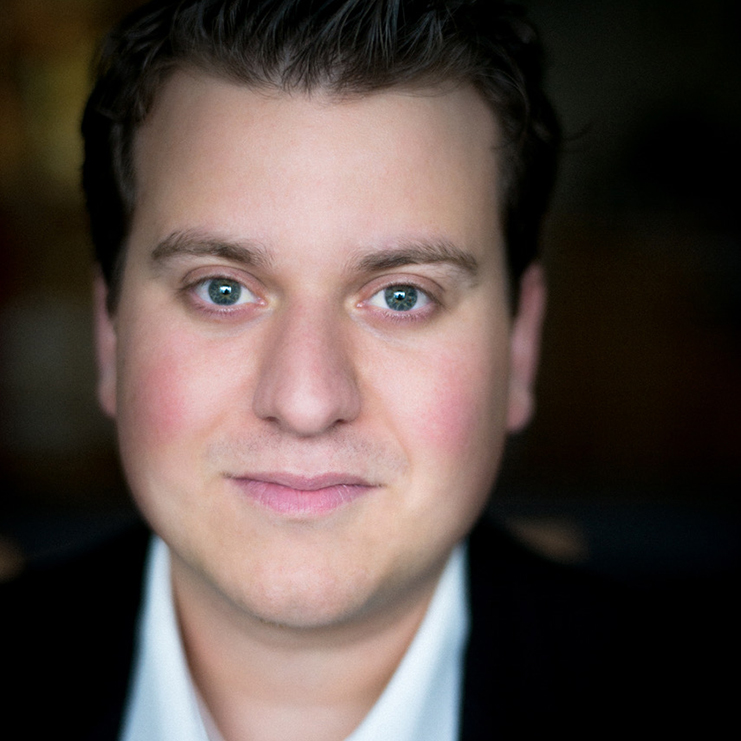 Holder of a 2022 Borletti-Buitoni Trust Fellowship, Selected by Gra,ophone as “One To Watch”, Winner of First Prize at the 2016 Kathleen Ferrier Awards and an Associate Artist of The Mozartists, Alessandro Fisher was a member of the BBC New Generation Artist Scheme between 2018 and 2021. He read Modern and Medieval Languages at Cambridge, where he was a Choral Scholar at Clare College, furthering his studies at London’s Guildhall School of Music and Drama.

Career highlights have further included Fabio Berenice for the Royal Opera, London, Bastien Bastien und Bastienne for The Mozartists, Fenton Falstaff for The Grange Festival, Britten War Requiem in Lincoln Cathedral, Monteverdi Vesperae della beate Vergine with La Nuova Musica, Roussel Evocations with the Radio Filharmonisch Orkest, Saint-Saëns Christmas Oratorio and Schubert Mass in G with the Radio Filharmonisch Orkest, Vaughan Williams On Wenlock Edge with the BBC Philharmonic The Complete Songs of Clara Schumann at St John’s, Smith Square, with JongSun Woo at the Hay Festival, with Sholto Kynoch for the Cheltenham, North Norfolk Music and Oxford Lieder Festivals and with Joseph Middleton at the Wigmore Hall. At the Wigmore Hall, he also appeared with Graham Johnson in Covid’s Metamorphoses to celebrate the 120th Anniversary of the Hall and with Anna Tilbrook in A Gardener’s World. He made his BBC Proms debut singing Songs by Prince Albert of Saxe-Coburg and Gotha with Stephen Hough.

Recent engagements have included Osvaldo in Mercadante’s Il Proscritto for Opera Rara, for whom he also gave a Salon Series recital, the B Minor Mass with the New London Orchestra, Britten Les Illuminations with the Ulster Orchestra, Elias at the Badisches Staatstheater Klagenfurt, Vaughan Williams Symphony No. 3 and On Wenlock Edge with the BBC Philharmonic, First Brother The Seven Deadly Sins on tour with the London Symphony Orchestra conducted by Sir Simon Rattle (London, Cologne, Essen), Green Spaces: A Celebration in Song for Opera Holland Park and a New Generation Artist Recital at Stoller Hall. At the Wigmore Hall, he also appeared in A Home for All Seasons and, with The Mozartists, The Swinging Sixties.

Upcoming engagements include Ferrando Così fan tutte for The Grange Festival, Berlioz L’Enfance du Christ at the Wimbledon Festival, Mendelssohn Die erste Walpurgisnacht with Huddersfield Choral Society, Mozart Mass in C Minor with Royal Northern Sinfonia and at Salzburg Mozart Week with Le Concert des Nations, Vaughan Williams On Wenlock Edge and Serenade to Music with the Nash Ensemble, On Wenlock Edge with the Navarra Quartet for Oxford Lieder, a recital with Simon Lepper for the NI Glenarm Festival of Voice and Magic Lantern Tales at the Beverley Chamber Music Festival. For Oxford Lieder, he appears in Friendship in Song: An Intimate Art and for the London Song Festival, he appears in Friends and Lovers: Franz Schubert and Johan Mayrhofer.

His BBC broadcasts have included Britten’s Seven Sonnets of Michelangelo with Joseph Middleton, Finzi’s Dies Natalis with the BBC Symphony Orchestra Strings conducted by Martyn Brabbins and Farewell to Arms with the BBC Concert Orchestra conducted by Anna-Maria Helsing, Songs by Bellini, Donizetti, Tosti and Verdi  and Hahn’s Venezia with Garry Matthewman, Michael Head’s Over the rim of the moon with Ashok Gupta, Songs by Lorca and Rodrigo with Thibaut Garcia, Vaughan Williams’ Four Hymns with the BBC Symphony Orchestra conducted by Martyn Brabbins and Nordic Tales (Songs by de Frumerie, Delius, Grieg and Schumann) with Roger Vignoles, the last live broadcast from the Wigmore Hall before the March 2020 lockdown.

His recordings include Theodore in Edward Loder’s Raymond and Agnes with the Royal Ballet Sinfonia conducted by Richard Bonynge and Harlequin in Ethel Smyth’s Fête Galante with Lontano conducted by Odaline de la Martinez for Retrospect Opera, L’Incoronazione di Poppea with Les Arts Florissants directed by William Christie for Harmonia Mundi CD / DVD, Bastien und Bastienne with The Mozartists conducted by Ian Page on Signum CD (Nominated for a 2019 International Classical Music Award) and Roussel’s Evocations with the BBC Philharmonic conducted by Yan-Pascal Tortelier for Chandos.

“Alessandro Fisher was a characterful leader of the castle guards.”

“Good to be introduced to tenor Alessandro Fisher as the other Brother, a name I am sure we will encounter again.”

“The accompanying male-voice ensemble – Andrew Staples and Florian Boesch as Anna’s father and mother, with Alessandro Fisher and Ross Ramgobin as the brothers – provided a suitably pungent commentary.”

“Fisher’s performance was supremely accomplished, delivering songs in French, Russian, German and Italian with equal ease – and his high notes were floated with exceptional grace.”

“Fisher was an engaging story-teller, relaxed of voice, singing with sensitive phrasing. Fisher’s voice was sweet and dreamy, but never unfocused, perfectly conveying the mystery and pathos of loss.”

“Alessandro Fisher’s light tenor was ideal for these tender settings, and his admirable diction enhanced the stylish phrasing.”

“Alessandro Fisher’s tenor voice was spot on for delivery of the Lieder, which he did with sensitivity and well-judged technique.”

“…in five sub-Schubertian songs by Prince Albert, mellifluously sung by Alessandro Fisher, you did get a feel for how musical soirées must have sounded in the 1850’s.”

“Fisher sang with a beautifully elegant sense of line, not being frightened to fine his tone right down.”

“Alessandro Fisher impressed with a strong, flexible tenor as Fabio.”

“…with a finely nuanced tenor voice and plenty of acting aplomb.”

“I particularly liked Alessandro Fisher, a stylish and meaty tenor…”

“…strong voiced and with bags of presence.”

“…delightfully partnered by Alessandro Fisher’s Fenton, whose “Dal labbro” is enough to make you curse its brisk interruption by Alice and her fellow masqueraders.“

“…gave an ardent performance as Nannetta’s young beau with his supple, lyrical tenor…”

“Alessandro Fisher is a gratifying Fenton – whose ardent tenor rings out tellingly in the final scene.”

“Alessandro Fisher, as Lucano, did a great job in a very sensuous duet with Kate Lindsey’s Nerone.“

”As Bastien, Alessandro Fisher is light-voiced, ardent and convincing…”

“Given tenor Alessandro Fisher’s honeyed tones, Rosina might have done better to choose him; why she falls for Don Cassandro is a mystery…”

”Lukas Jakobski presented his strong bass to excellent effect as Don Cassandro and Alessandro Fisher his equally accomplished tenor as Don Polidoro, with the splendid acting of both helping to stamp out their respective characters.“

“Alessandro Fisher, the possessor of an exceptionally melliflous lyric tenor.”

”Alessandro Fisher was if anything still finer than heard in the recording, his eloquence in ‘Meiner Liebsten schöne Wangen’ (‘My beloved’s lovely cheeks’) a delight.“

“…sung with notable control and a steady, sympathetic tone by the tenor Alessandro Fisher…”

“As Christian, Alessandro Fisher, battling bronchitis though you would scarcely have guessed from his warm, lyrical tone, took physical risks (swooning to the ground in a confined space) and had lovely, rakish charm.”

“Alessandro Fisher was touching as the vacillating Christian. Flexible and agile of voice when lured by Worldly Spirit’s seductive charms, his tone took on a darker hue when he recalled the torments of Hell and Judgement…”

“Alessandro Fisher is a welcome new tenor on the block, smooth and elegant.”

“Oxford Lieder Young Artists Winner Alessandro Fisher is the other tenor delight of this mixed evening.”

“He has an open, warm and soft-grained tenor: a delight to listen to.”

“…Alessandro Fisher, whose lines leapt over the footlights.”

“Vocally the evening belongs to Alessandro Fisher. Originally cast in a supporting role, he stepped up into the title role with enormous confidence and a most wonderfully limpid tone to really make his mark. It is hard to imagine the role being sung better.”

“As the Count, tenor Alessandro Fisher was every inch the Georgette Heyer hero in a bravura performance, naturally commanding and fabulously insouciant, with lyrical tone and surprising philosophical depth behind his agenda of pleasure…“

“Alessandro Fisher in the central role convincingly embodies the nature of a confident, charming rake with lyrical and well-projected singing…”