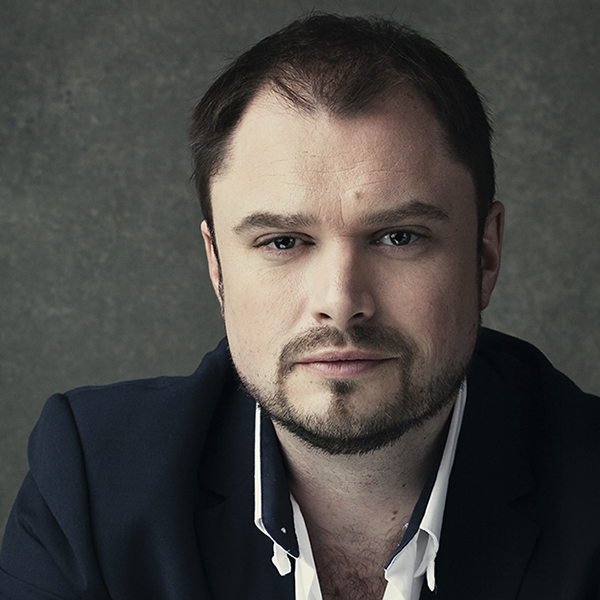 Born in Essex, Alexander James Edwards began singing as a chorister at St Paul’s Cathedral, continuing his studies at the Royal Northern College of Music and the Royal Academy of Music. He joined the Young Artist Programme at the Royal Opera House, Covent Garden, making his debut as Messenger Aïda.

During 2018 / 2019, Alexander James Edwards returned to Theater Lübeck to sing Don Ottavio Don Giovanni and Shuisky Boris Godunov. Concert highlights included Classical Spectacular at the Royal Albert Hall, a Grand Opera Gala at the Royal Festival Hall, Last Night of the Autumn Proms and Last Night of the Christmas Proms at the Bridgewater Hall, Manchester, a New Year’s Day Prom at Philharmonic Hall, Liverpool, Verdi Requiem at the Watford Colosseum and The Public Decides at Norrlandsoperan.

In 2011, Alexander James Edwards was elected an Associate of the Royal Academy of Music by the Governing body of the RAM for distinguishing himself in the field of Opera.

“English tenor Alexander James Edwards is Mimi’s ardent Rodolfo. Passionate and abrasive, his interpretation is still consistently musical and he conveys the poet’s jealously and remorse in equal measure.”

“Alexander James Edwards makes Albert his own from his first entrance weighing the herbs, with his velvety soft cantilenas.”

“To the good fortune of Saturday evening’s audience, an indisposed tenor meant that the appealing Mimì of Alyson Cambridge was partnered by a terrific Rodolfo from another cast. Not having access to a programme (a long story) I wasn’t aware of the singer’s identity until after the performance, so I assumed that Gubbay had recruited a rising star from lands afar and was preparing to beg opera companies to take note. Instead the message is far simpler: why is Essex-born Alexander James Edwards not already a hot international property? His plangent timbre, at once romantic and heroic, is a rare enough beast and makes him the ideal Italianate tenor.”

“Alexander James Edwards, has an attractive lyric tenor sound, and was suitably dashing in his military uniform.”

“Alexaner James Edwards’ hymn to Florence was finely rapturous. He has an Italianate voice with quite a dark, rich sound which suits some of the more spinto-ish roles. As Rinuccio he sounded more developed and mature than some singers, but James Edwards brought the requisite flexibility to the role too.”

“…his fervent paean to the wonders of ancient Florence was beautifully rich and velvety of tone and his lovely duet with Lauretta at the close was classic Puccini – a moment of sentimentality to soften the farce.”

“Alexander James Edwards, an Italianate tenor of the first order, is sturdy and ringing as Rinuccio…”

“Alexander James Edwards looks the part and acts it confidently, his beefy tone fleshing out the US sailor’s blend of brash and callow.”

“Edwards is Pinkerton, anti-hero and all-round rotter, and he makes the best fist of the role I’ve heard in years. The voice rises easily and powerfully through an imperceptible passaggio and his acting has the throwaway bravura that only true stage animals can achieve.”

“As Ruggero, Alexander James Edwards is smooth and strong on all his notes, singing with superb accuracy. Sincere and straightforward, with just a hint of the prude, Edwards makes a perfect foil to (Ilona) Domnich’s tantalising siren.”

“Alexander James Edwards (who sang the supporting role of Gobin in the Royal Opera’s 2004 revival) was strongly cast as the young, infatuated Ruggero. Edwards made Ruggero’s diffidence in the face of metropolitan sophistication palpable, and he put his strong, lyrical tenor to fine use in the show-stopping ‘Paris, the city of desire’. He was very touching in his flirtation scene with Magda leading to his declaration of love in Act Two and approached an Alfredo-like gravitas when Magda gives him up in Act Three to return to her old life.”

“The naïve, infatuated Ruggero was touchingly portrayed by Alexander James Edwards, whose ardent tenor gave ‘Paris, the city of desire’ a Broadway heft, and he and (Ilona) Domnich were very convincing in the neatly-directed seduction scene.”

“…sings carefully throughout and turns up the emotional volume in the last act.”

“…has the right Italianate warmth of sound.”

“(his) tonal quality is sufficiently warm and Italianate for him to field a memorable presence.”

“Alexander James Edwards was a forthright Cavaradossi throughout, with a great ringing tone…”

“Best of the cast seems to me the British Alexander James Edwards, who completely inhabited the role of Tom Rakewell. He has an amazing voice and is just cut out for the role.”

“Alexander James Edwards was wonderful in the demanding role of Tom Rakewell, singing with glowing beauty.”

“The singers in the Liebeslieder quintet are outstanding…”

“Alexander James Edwards, a tenor both melting of tone and powerful…”

“In the other roles, Alexander James Edwards as Roderigo pleased above all…”

“In scenes from Act II of Rossini’s Otello, tenor Alexander James Edwards in the title role profited from an Italianate ring to the top of his voice…”

“Essex girls might grab most of the headlines, but outstanding tenor Alexander James Edwards single-handedly did more for the men of his county, than all the fake tan and stiletto heels put together. With the almost obligatory arias from Messiah, it was obvious that here was a voice to be reckoned with. But James’s stunning performance of three of Puccini’s best-loved numbers, and an equally impassioned account of Bizet’s Flower Song from Carmen clearly showed what he liked doing best, putting him streets ahead of nearly all the other soloists to have graced this annual Christmas event.”