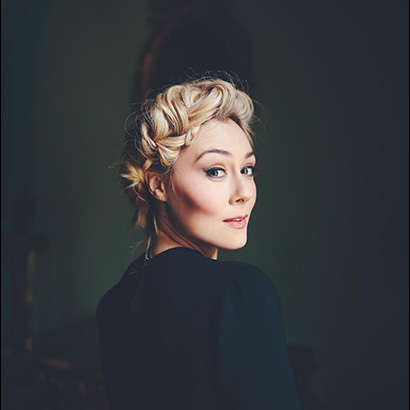 Blessed with “a lustrous voice, full of expression” (The Financial Times), Angela Simkin, originally from Lincoln, began her training at the Royal Northern College of Music, furthering her studies at the Royal College of Music, where she was a member of the International Opera School and an Ian Evans Lombe Scholar, studying with Dinah Harris.

She is a Britten Pears Young Artist and acknowledges support from the Josephine Baker Trust, the Norrah Popple Award, the Boris Christoff International Award for Young Singers, the Georg Solti Accademia, the Mario Lanza Society, the Verbier Festival and the Worshipful Company of Musicians.

She sang Hermia A Midsummer Night’s Dream for The 2021 Grange Festival, and her engagements in 2021 / 2022 included returns to The Royal Opera, London, to sing The Herdswoman Jenůfa and Flora Bervoix La traviata, to the Grange Festival as Phoebe Meryll The Yeomen of the Guard and Beethoven Symphony No. 9 with the Oxford Philharmonic Orchestra.

She joins the Ensemble of the Landestheater Linz for the 2022 / 2023 season, where her roles will include the title role in Rinaldo and Cherubino Le nozze di Figaro.

Concert engagements have included Lucilla Il vologeso and Messiah for The Mozartists, Messiah for Raymond Gubbay Ltd at London’s Royal Festival Hall, the Nelson Mass at both The Music Hall, Aberdeen, and The Snape Maltings, Mozart Requiem with the Orion Orchestra and Opera Galas with the Southbank Sinfonia and the Ten Tors Orchestra.

“Angela Simkin is a highly emotional Rinaldo, thrilling in her furious coloratura.”

“In the title role, Angela Simkin, newly engaged in Linz, is a mezzo convincing both emotionally and stylistically.”

Phoebe Meryll: The Yeomen of the Guard / The Grange Festival 2022

“Angela Simkin, with her full and nuanced mezzo-soprano, tremendous accent and perfect demeanour for the role is a first-rate Phoebe.”

“There were some nuanced individual performances…Angela Simkin as Phoebe Meryll, whose singing was sweet and whose face was a picture as she watched her dreams unravel.”

“The most subtle of the songs is for Phoebe, the daughter of the Tower’s Sergeant Meryll, as she taunts the head jailer in “Were I thy bride”, its magical orchestration and modulations surely paying a tribute to Mozart. Angela Simkin delivers it charmingly…”

“Angela Simkin as fierce Lucilla rises to the demanding writing…”

“Harriet Eyley (Frasquita) and Angela Simkin (Mercédès) made attractive and vivacious companions of Carmen, singing and acting with pleasing commitment and judgement.”

“Mezzo-soprano Angela Simkin has a lovely dark, burnished alto voice with a nice firmness in the middle and lower ranges which will, I think, make her a strong interpreter of the role. She sang a finely musical account, constantly turning in beautifully shaped phrases, and in the showier Guadagni sections brought out a superb technical ability too.”

“Most challenging of all is the role of the heroic Teseo, written for the star castrato Carestini and here sung by Angela Simkin; she shirks nothing, keeping her head while the notes gather thick and fast all around.”

“There are outstanding performances from Angela Simkin’s traumatised Iside…”

“Angela Simkin’s Iside was brilliantly strong and characterful throughout…”

“The standout performances are the three women: Angela Simkin deploying her rich mezzo as the increasingly deranged Iside…”

“At such times it’s exciting to look out for future stars, and in Angela Simkin we have one. A mezzo of rich velours and substantial range and power, she already has an impressive CV and is destined for great things.”

“Angela Simkin, compelled to mutter and twitch throughout in response to the furies in Oreste’s head, has lustre…”

“In the title role, mezzo-soprano Angela Simkin has a lustrous voice, full of expression …”
The Financial Times

“Simkin moulds phrases and virtuosity into a seamlessly expressive whole, which is often all the more affecting for its restraint.

“…we also had a second mezzo of sensual quality in Angela Simkin, joining the Royal Opera’s Jette Parker Young Artists Programme at the start of next season and plangent as Lucio’s rejected fiancee whose magnanimity produces an unlikely volte face at the end.

“Angela Simkin sang Lucilla with charming demureness which elicited compassion for her situation as the intended bride whom Vero spurns.”

As Berenice, Gemma Summerfield’s soprano was rich, rounded and sumptuous, as was Angela Simkin’s mezzo-soprano as Lucilla, though this was also possessed of a more forthright edge.”

“…the mellow richness of her mezzo declared the strength of her love for Lucio, and made the somewhat brittle volte-face – when Lucilla puts aside her dented pride and forgives the irresolute Emperor – more credible than it might have been.”

“There are clearly some splendid young voices at the RCM. I enjoyed the array of excellent young women – including Angela Simkin a glamorous and seductive Concepción, both vocally and otherwise.”

“Angela Simkin made a poised and soignée Madama la Rose who runs the Hotel and seemed to spend a lot of time soothing her crazy guests, But she too gets a solo moment and Simkin (experienced in Handel and G&S) showed that she could shine in Rossini too.”

“As the Angel, the aptly-named Angela Simkin excels, round of voice and absolutely beautiful of sound.”

“There was strong support from Angela Simkin’s implacable Angel…”

“One other last-minute substitution deserves mention: Angela Simkin’s jump-in as a gleamingly-sung, lively Tebaldo, a credit to the Jette Parker programme.”

“Angela Simkin was a fine Tebaldo…”

“In purely vocal terms, there was much to enjoy. Andrea Mastroni, David Junghoon Kim and Angela Simkin made their mark in small roles.”

“With strong support from Pohl’s handsome, expressive Posa, Semenchuk’s ferocious Eboli and Angela Simkin’s perky Tebaldo, there is much to admire.”

“…a gleefully energetic stage presence with a twinkle in the eye and a vivid, colourful tonal palette in the voice.”

“…Angela Simkin, a newcomer to the Jette Parker scheme, made a fine fist of Flora.“

“…there were arresting cameos from two of the Royal Opera’s apprentices, Angela Simkin (Flora) and Yuriy Yurchuk (Douphol).”

“Angela Simkin was a joy to hear and produced beautiful tone and had a control and richness of sound that shone out in her arias Dido’s Lament and ‘Che faro senza Euridice.”

“…the three Rhinemaidens, Lauren Fagan, Christina Bock and Angela Simkin got the singing off to an excellent start, the three voices buoyant and fresh, and blending beautifully.”

“Lauren Fagan, Christina Bock and Angela Simkin made for an exceptionally melodic and vicious trio of Rhinemaidens…”