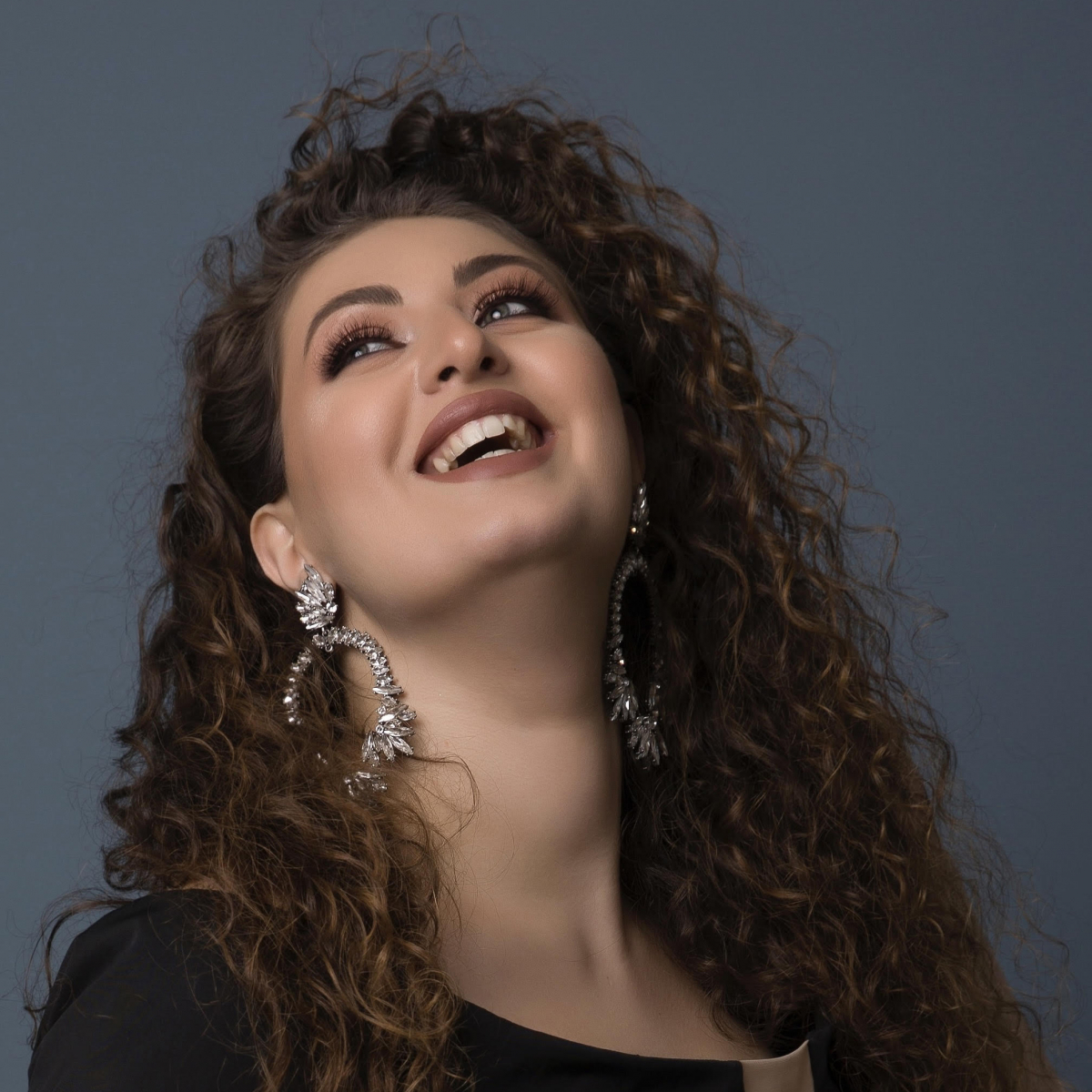 Selected by The Times as “The Face to Watch in Opera 2020” and by Der Theaterverlag as one of the outstanding artists of 2020, Armenian soprano Anush Hovhannisyan started her career from the Jette Parker Young Artists Programme at the Royal Opera House, Covent Garden. She is the winner of First and Public Prizes, Deutsche Grammophon and Royal Danish Opera special prizes at the 2016 Stella Maris Competition, the winner of the 2014 Ernst Haefliger International Swiss Competition and represented Armenia at BBC Cardiff Singer of the World 2017.

Nominated for the International Opera Awards, she made a highly acclaimed debut with Scottish Opera as Violetta La traviata, which saw Opera Magazine writing, “(she) has the coloratura, the musical intelligence, the rock-solid technique, the evenness throughout an ample vocal range, the dramatic versatility, the imposing but graceful physique – and indeed the pathos” and The Sunday Times acclaiming “a ‘star is born’ moment.”

Now based in London, Anush Hovhannisyan began studying violin aged six at the A. Spendiaryan Music School and went on to study singing at the Yerevan State Conservatory and at the Royal Conservatoire of Scotland. She is a Samling Artist, and her many awards and scholarships further include the Clonter Opera Prize, the Bayreuth Prize from the Wagner Society of Scotland, Karaviotis Prize at the Les Azuriales International Singing Competition and the Ian Smith of Stornoway Award for Opera, awarded by the Royal Conservatoire of Scotland.

Her recordings and broadcasts include Shostakovich Symphony No. 14 with the Southbank Sinfonia and Emma Khovanschina with the BBC Symphony Orchestra (BBC Radio 3), Decades – A Century of Song, Vols 2 and 4 for Vivat CD, Rimsky-Korsakov Romances for Stone Records (a Sunday Times ‘Album of the Week’), Songs by Scriabin for Decca’s complete piano anthology of his music, BBC Radio 3’s Big Chamber Day and The Royal Ballet’s Woolf Works, now available on Opus Arte DVD.

A keen advocate of young musicians, Anush Hovhannisyan is Casting Director of the New Generation Festival, Florence, Artistic Advisor of the Mascarade Opera Studio and on the Artistic Advisory Committee at Andermatt Music in Switzerland. Part of her mission as an associated artist and a member of the Mascarade Opera Fondazione centres around the education, creating exposure and artistic opportunities for younger musicians. She mentors young singers and strongly believes in supporting the industry by guiding young musicians.

“…Anush Hovhannisyan and Rachel Kelly stood out as a stellar Frasquita and Mercédès.”

“…sings the title part with a wonderful round soprano, many facets of interpretation and the finest pianos, great intimacy, dramatic intensity and perfect coloratura.”

“The Sitâ, hypnotically striking Armenian soprano Anush Hovhannisyan has already made a mark on the Royal Opera’s Jette Parker Young Artists Programme. She hurled out some thrilling top notes. What’s more, the voice has rare individuality; it will be exciting to hear it develop.”

“Anush Hovhannisyan was a splendid Sitâ. She has a lovely warm, open tone, with a smoky lower register. Her big solo comes in Act V, having fled the bridal chamber for the temple, and she sang this with confidence and dramatic urgency.”

“As Sitâ, Anush Hovhannisyan’s voice could feel rich and vibrant, and yet also smoky and spiritual.”

“Anush Hovhannisyan has a lovely spinto-ish sounding voice, richly lyrical but with just a nice edge to it. She brought out the character’s sultry intensity, and in the two long scena’s Massenet gives her we really heard how she combined musical intelligence with a strong sense of character and a superb feel for the shape of the music. Massenet needs to seduce without getting too saccharine, and Hovhannisyan got it just right, as well as looking every in the part too.”

“Hovhannisyan is a commanding presence and sings with a gleaming tone; yet she can be expressive and genuinely affecting”

“Armenian soprano Anush Hovhannisyan, who represented her country two years ago at the Cardiff Singer of the World competition, revealed considerable acting talent, especially when she was manipulating the feelings of both Marcello and her rich, elderly suitor Alcindoro in the Café Momus. Her “Quando m’en vo” was particularly impressive, sung along with charmingly coquettish body language.”
Bachtrack

“Musetta, played by Anush Hovhannisyan, was the highlight of the night. Her vocal quality is without parallel and she was the only principal who did not occasionally struggle to be heard over the orchestra. Her pianissimo at the end of her Act 2 aria Quando m’en vo was extremely thrilling and I loved the way she was able to go from the utterly ridiculous character in Acts 2 and 3 to the much more sympathetic pious one in Act 4.”

“Musetta is sung by Armenian Anush Hovhannisyan in her first role for Opera North and her debut is dazzling.”

“Anush Hovhannisyan is scintillating as the flamboyant Musetta, and her burlesque treatment of the aria Quando m’en vo is a show-stopping moment.”

“The multinational cast is exceptional, with Anush Hovhannisyan, making her Opera North debut as a flirty Musetta…”

“Anush Hovhannisyan is (in Act 11) a larger-than-life scene-stealing Musetta, with oodles of voice and personality. It’s a luxury to have an operatic “leading lady” in this sometimes undercast role.”

“A gorgeous feast of Rimsky-Korsakov’s neglected Romances, rich in melody and colour. The two terrific, impassioned young singers are ones to watch.”

“With the exception of The Nightingale and the Rose, Rimsky’s art songs are less well known than they deserve, so it is astute of Stone to present two rising young artists in a disc entirely devoted to these beautiful Romances. The Armenian Hovhannisyan wraps her bright, sensuous soprano around this famous number…”
The Sunday Times

“Pharaoh’s wife, Anush Hovhannisyan made a fine contribution with her Act Two aria, in duet with a clarinet; initially a touch brittle, her coloratura for the faster stretta was splendidly pure of tone and exact in tuning, making a striking impression.“

“As the Queen of Egypt, Amaltea, Anush Hovhannisyan illuminated her lines with subtle emphases, and, when the given the opportunity, laser-beam top notes…”

“As Tamara, Anush Hovhannisyan thrilled with the vibrancy and abandon of her performance, and dramatically she charted the mental decline and increasing emotional torment of the girl.”

“Anush Hovhannisyan also stood out as Tamara, revealing great power in her soprano, yet also rendering some of the most challenging top lines with sensitivity and precision.”

“The Armenian soprano Anush Hovhanisyan’s Tamara grew as the evening progressed from spirited to impassioned, with a gleaming soprano sound that enabled her to inhabit the part more fully than the Tamaras in any other performances of The Demon I’ve experienced.”

“Hovhannisyan’s prima-donna temperament and exciting singing mean she steals the limelight as Tamara, with her brilliantly shaded voice and nuanced artistry. Her use of colour and dynamics is spellbinding, and she threw herself physically into the part, as if in a fully staged production.”

“Anush Hovhannisyan is an impressive Lucilla, her voice capable of being as subtle as it is vibrant.”

“Throughout the night, the passion and power of Scottish Opera debutante (Anush) Hovhannisyan included a voice that shape-sifted from velvety richness to steely power with confident gymnastics and high notes to die for along the way.“

“It is not every day – nor every month, not even every year – that you can say “a new Violetta is born.” Yes, yes, up-and-coming sopranos are constantly taking on the challenge of Verdi’s tragic heroine all over the world, but of how many can you instantly say “she is a born interpreter of the role?” On the evidence of her first performance in Glasgow – actually the fourth night of David McVicar’s 2008 staging – it can unquestionably be said of Anush Hovhannisyan. The Armenian soprano, a graduate of the Royal Conservatoire of Scotland and the Jette Parker Young Artists Programme, has the coloratura, the musical intelligence, the rock-solid technique, the evenness throughout an ample vocal range, the dramatic versatility, the imposing but graceful physique – and indeed the pathos. She even knows how to ‘speak’ the Italian text, so much so that that the simple word ‘Si’ resonates with meaning.”

“…this was a performance of astonishing maturity with no obvious difficulties either vocally or dramatically. She fitted into the ensemble with complete confidence. Violetta should remain a centrepiece of her repertoire for some time to come.”

“Anush Hovhannisyan sweeps all before her with her bright, lyric soprano and tall, handsome figure. She’s helped by David Parry’s stylish, Italianate conducting, but I’d hazard that this was a “star is born” moment for the young Armenian.”

“Anush Hovhannisyan is magnificent as Violetta. Not a cough in sight but a body wracked with pain and a gradual, if inevitable, sense of collapse. The final act is deeply moving in her intense vulnerability, never able to do more than crawl and yet fighting all the time to live.”
Lark Reviews

“Anush Hovhannisyan is a fluent Hélène…”

“Anush Hovhannisyan is a powerful Hélène with a well-handled voice…”

“The voice is full of colour, the technique brilliant and she looks striking. From the opening notes of her first aria with its robust incitement to rebellion, there is that dignity and authority called stage presence.”

“Hélène is the story’s one star, and Anush Hovhannisyan seizes the opportunities Verdi gives her with both hands. The audience loved her.”

“The star of the show, however, was Armenian soprano Anush Hovhannisyan…always fascinating to watch and lovely to hear.”

“As the Duchess Hélène, Anush Hovhannisyan impresses with her formidable technical poise…the young soprano produced ravishing sounds in the moments of sweetness, of a quality that could be described as seraphic, and yet was full of bite and passion in the climactic scene.”

Anush Hovhannisyan imbued Hélène with a dark authority and steely determination…her power and presence were amongst the most convincing onstage: she was the determined powerhouse, vocally and dramatically, of the breathtaking final scenes.”

“Hovhannisyan impressed on her first entry by her quality of stillness, and made Hélène’s character only gradually unfold. throughout the opera. Her bolero in Act Five, dramatically redundant but the opera’s hit number, was beautifully done…”

“She sang beautifully in the song demanded of her in Act I, which had the power and spirit to rouse the emotions of the Sicilian people. She was impressively affecting in her duets with Henri, and her bolero (‘Merci, jeunes amis’) in Act V was utterly charming.”

“It’s not a great evening, either, for the principals, with the exception of Anush Hovhannisyan’s spirited Hélène, which demonstrates her considerable potential.”

“By far the most distinguished of the principal singers was the Armenian soprano Anush Hovhannisyan as a striking, raven-haired Hélène…”

“The cast’s one outstanding member was the Armenian soprano Anush Hovhannisyan, as the militant heroine Helene. Blessed with an alluring ruby-red timbre, she sang with a refinement of phrasing and musical imagination absent from her male colleagues…”

“New to me were the Glinka Songs, whose mix of Italianate bel canto lyricism and Russian melancholy is thrillingly caught by the flame-toned Armenian soprano Anush Hovhannisyan…”

“Armenian soprano Anush Hovhannisyan, who represented her country two years ago at the Cardiff Singer of the World competition, revealed considerable acting talent, especially when she was manipulating the feelings of both Marcello and her rich, elderly suitor Alcindoro in the Café Momus. Her “Quando m’en vo” was particularly impressive, sung along with charmingly coquettish body language.”
Bachtrack

“Musetta is sung by Armenian Anush Hovhannisyan in her first role for Opera North and her debut is dazzling.”

“The multinational cast is exceptional, with Anush Hovhannisyan, making her Opera North debut as a flirty Musetta…”

“Anush Hovhannisayn is (in Act 11) a larger-than-life scene-stealing Musetta, with oodles of voice and personality. It’s a luxury to have an operatic “leading lady” in this sometimes undercast role.”