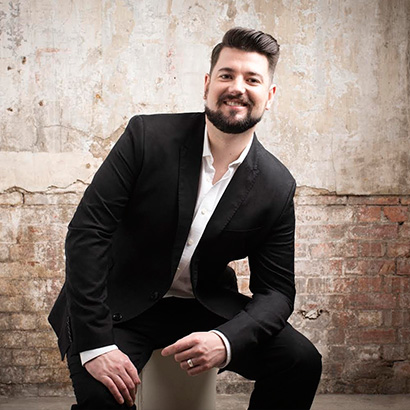 He completed a Master of Arts in Advanced Vocal Studies with Distinction in 2016 at the Wales International Academy of Voice, studying with Dennis O’Neill, attended the 2016 Lisa Gasteen National Opera Studio, the 2017 Georg Solti Accademia di Bel Canto, was a 2019 Jerwood Young Artist with Glyndebourne Festival Opera and completed his studies during 2019 / 2020 at the National Opera Studio.

His studies at the NOS were supported by a Young Artist Development Award from the Glyndebourne New Generation Programme. He is also a 2019 recipient of a Help Musicians K Sybil Tutton Award, a 2019 Independent Opera Voice Fellowship, and has been sponsored by The Todd Family Trust, the Tait Memorial Trust and the John and Margaret Hunn Educational Trust. Competition success includes First Prize in both the Wellington Dame Malvina Major Foundation Aria Competition and the New Zealand Aria Competition.

At the Guildhall School of Music and Drama, his roles included Lysander A Midsummer Night’s Dream, Ferrando Cosí fan tutte and Charles The Long Christmas Dinner and he also sang a critically acclaimed run as Tom Rakewell The Rake’s Progress for British Youth Opera

Engagements during 2021 / 2022 included his principal debut with Glyndebourne as Tom Rakewell The Rake’s Progress on the Autumn Tour and Laurie in the UK premiere of Mark Adamo’s Little Women for Opera Holland Park, for whom he also appeared in America in Song.

Engagements during 2022 / 2023 include his debut at Theater Lübeck as Albert Herring, Melot Tristan und Isolde for The Mahler Players and Celebrate Christmas with Auckland Philharmonia Orchestra.

“Frederick Jones’ Laurie was clear, ardent and more than capable of turning up the decibels when wanted.”

“Laurie, is given real pathos by Frederick Jones, torn by the rejection of the childhood friend whom he once loved as a playmate and rare intellectual equal and now intends to love as a woman.”

“Frederick Jones, the most technically secure Tom I’ve ever heard…”

“Frederick Jones seemed born to sing Rakewell, so far did his fine singing and acting make it difficult to recall a more persuasive interpretation.”

“In a role he has already sung for British Youth Opera, tenor Frederick Jones is unimpeachable as Tom Rakewell…”

“In Frederick Jones we have a fine lyric tenor of technical control negotiating complex decorated lines with assurance, and who showed his true mettle in the graveyard scene.”

“Frederick Jones’s relaxed, warm tenor, which has lyricism and strength at the top, gives Tom a lovely confidence and optimism – as in the opening scene when he guilelessly believes his dreams will come true, and later, when Shadow’s bread-making machine seems to offer him an opportunity to right wrongs and do good.  This rake reflects little and acts fasts, with impetuous hopefulness.  Both Tom’s weary resignation in the face of Baba’s hysterical porcelain smashing – he offers up the final plate with a stoic shrug – and his agonising regret in the graveyard scene are convincing and conjure our sympathy.”

“…the cast is outstanding, with Frederick Jones playing Tom Rakewell as a good-natured naïf, and singing with purity and sweetness…”

“Italianate-sounding Jones, the Lysander, is surely heading for Verdi and Puccini…”

“Tenor Frederick Jones properly caught our attention in the opening “Comfort ye,” the voice having a real “ring,” compelling our interest further with the growing urgency of his message…investing every phrase with meaning, declaiming, and then reassuring as the text required.”

“The cast is led by Frederick Jones as Tom, whose clarion tenor scythed through his notes from opening duet to “death’s approaching wing”, incipient wastrel and insanity all believable and well characterised. His diction proved to be the clearest and his attempt, when questioned, to define love was a touching moment.”

“Frederick Jones projected Tom’s vocal lines with ease and confidence, giving him a sort of rumpled charm and making much of his character’s laziness and was profoundly moving in his final scene. His voice, while nicely lyric, had a good ping to it.”

“Tom’s reflections on his love for Anne and his fears for the future bloomed warmly and the challenges of the complex lines proved no problem for the tenor.”