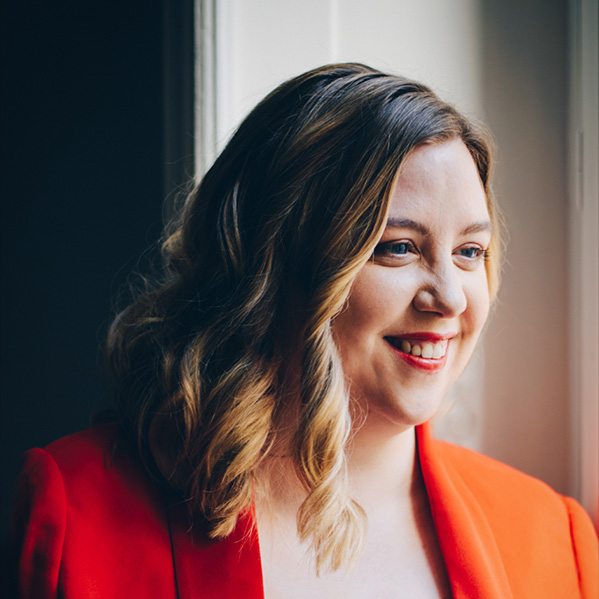 She began her studies as a linguist, graduating with a First-Class Honours Degree in French and Italian from Clare College, Cambridge. The recipient of an Independent Opera Voice Scholarship, she continued her training as a singer at the Guildhall School of Music and Drama, the Royal Conservatoire of Scotland and the National Opera Studio. She continues her studies with Valérie Guillorit.

She recently made debuts in recital and as Second Maid Elektra at the Théâtre du Capitole, Toulouse, and featured on Générations France Musique, Le Live. Summer 2021 saw the release of her first CD, Aimer à loisir, singing songs by Chausson, Fauré and Ravel with Edward Liddall on B Records.

Engagements in 2021 / 2022 include Mercédès Carmen at the Théâtre du Capitole, Toulouse, Cook’s Apprentice Rusalka for Garsington Opera at Wormsley, Chausson Poème de l’Amour et de la Mer with the Staatsphilharmonie Rheinland-Pfalz at the 2021 Festival Murten Classics, Ravel Shéhérazade with the Prague Radio Symphony Orchestra and Job’s Wife in Gregor Joseph Werner’s Job with Les Talens Lyriques at the Haydneum in Budapest. With Les Talens Lyriques, she will also tour Plaisir d’amour ne dure qu’un moment (Staatsoper Berlin, Festival AntiquaBZ) and with Collectif Lovemusic, she will appear in Talking Music, the première performances of Philip Venables’ Numbers 81-85 and Numbers 96-100 at the Festival Musica, Strasbourg, and the Festival d’Automne, Paris. Recital engagements include debuts at the Opéra national de Bordeaux, the Opéra de Lille, the Opéra de Montpellier, the Musée d’Orsay and, with the Académie-Orsay Royaumont, at London’s Wigmore Hall.

She was a member of the Junges Ensemble at the Semperoper Dresden, where her roles included Mercédès Carmen, Lucienne Die tote Stadt, Cherubino Le nozze di Figaro, Second Lady Die Zauberflöte, Flora Bervoix La traviata and Clare in the German première of Philip Venables’ 4.48 Psychosis. Further engagements have included covering the title role in Ariodante with Marc Minkowski and Les Musiciens du Louvre, Rosina Il barbiere di Siviglia for Lyric Opera, Dublin, From Purcell with Love with Les Talens Lyriques at the 2020 Innsbrucker Festwochen der Alten Musik and a recital at the Royal Conservatoire of Scotland.

“…a lush mezzo, Grace Durham, a name to watch…”

“Is it impossible, then, to sing French as it is spoken? Of course not – and it is a British artist who proves it, alining herself with a long tradition of French singer-speakers in a way that many native Francopohones would envy.”

“One of the great joys of a music lover’s life is to discover at the start of a career, new talent. In addition to her opulent and supple voice, perfectly projected and controlled, she also displays other major qualities such as charisma and intelligent use of text…this recital is a peak of the season and the revelation of a radiant artistic personality.”

“Haydn’s cantata Arianna a Naxos allowed Grace Durham’s talent as a true actress to bloom…but it was in La dame de Monte-Carl, another opera in miniature, that all her qualities truly came together: French that the French themselves would envy, a natural theatricality that brought every line of Cocteau’s text to life, and a superbly rich vocal timbre.”

“As Mercédès, Grace Durham with her tangy, well-projected mezzo has an ease on igh that enables her fully to take her party in the ensembles and finales.”

“In fact, nothing seems beyond her: she has a secure grasp of breath control, vocal flexibility, clarity of attack, quality of projection, energy and expressivity. Her vocal timbre is very attractive and her stage presence entirely convincing…the icing on the cake was the accompanied recitative preceding the aria – it was absolutely perfect, showing her to be a true actress…There is little doubt that one day Durham will be dazzling us with vocal fireworks in the manner of Hallenberg or Genaux.”

“The jury’s winner was mezzo-soprano Grace Durham from Great Britain, who was the final performer of the main concert, and sang again after the prizes were awarded. She chose not Handel but Johann Adolph Hasse’s Cleofide and from this opera presented the title character’s aria ‘Son qual misera colomba.’ She began with an extended recitative before putting the great flexibility of her warmly flowing mezzo-soprano to the test in breakneck runs. The variations and ornaments she added further allow us to imageine that this singer has a great career ahead of her.”

“we agree wholeheartedly with the jury’s verdict. The winner was the British mezzo-soprano Grace Durham, whose voice is rich and technically secure. More than with the Melani aria – in this case Acrimante’s ’Se d’amor la cruda sfinge’ – her extremely well deserved victory came with her second aria, ‘Son qual misera colomba’ from Hasse’s Cleofide, a score replete with obstacles not only in terms of coloratura but also, and especially, for the variety of colours it requires. All this goes to show that in competitions – at least in those as unarguably serious as the Cesti – the winners are those who dare to put themselves completely on the line.”

“Traditionally sung by light voices, Grace Durham surprises us with her full-voiced performance, with a rich, round and supple mezzo that gives weight to every note and every word. The text comes across clearly, as if spoken, and we rediscover this music in a new light.”

“Purcell’s dramatic and emotional genius, conveying pain through the vowel sounds, the nuances, the emphasis of the consonants and the precision of the coloratura – his ability to convey the varieties of love through his musical expression.”

“Grace Durham was a pert Rosina.”

“Grace Durham provides one of the most strongly emotional moments of the evening with a song in the style of Purcell.”

“The six excellent singers act and sing their challenging roles within the complex, multi-layered structure of the piece with intense passion and high-class vocalism.”

“The young mezzo-soprano Grace Durham performed her songs with dramatic commitment and a powerful voice.”