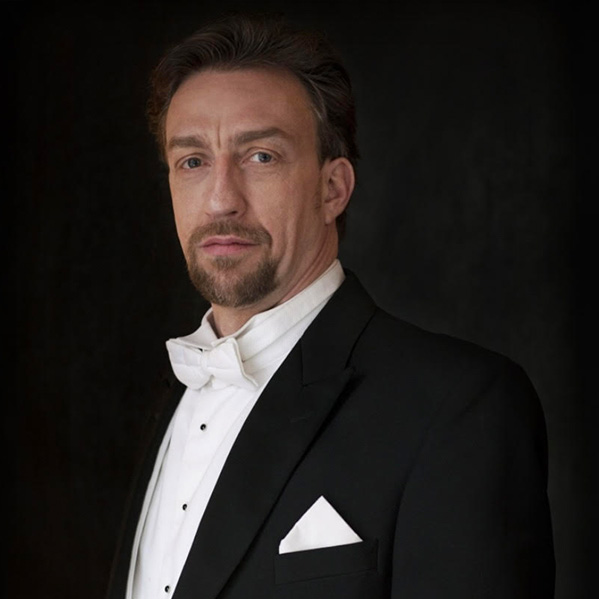 ulian Close began his career reading for PhD in Applied Physics at the University of Leeds, before studying at the Royal Northern College of Music.

He has since appeared with major companies throughout the UK including The Royal Opera, London, English National Opera, Longborough Festival Opera (in roles including Don Basilio Il barbiere di Siviglia and Fafner Der Ring des Nibelungen), Opera North, Saffron Opera Group (as Fasolt Das Rheingold, Hunding Die Walküre and Hagen Götterdämmerung) and Scottish Opera; as well as at the Buxton Festival; and at major concert venues such as the Barbican Centre, The Bridgewater Hall, Manchester, and the Royal Albert Hall; With the BBC Philharmonic conducted by Gianandrea Noseda, he sang Lodovico Otello.

In North America, he has established a long relationship with the Metropolitan Opera, New York, joining them for their productions of Fidelio, Prince Igor, Lulu (as Theatre Manager / Banker), Pelléas et Mélisande, Der Rosenkavalier, Otello, Rigoletto, Das Rheingold, Siegfried, Götterdämmerung and Tristan und Isolde. At the Dutch National Opera, he sang  Theatre Manager / Banker Lulu, and made his debut at the Teatro Colón, Buenos Aires as Baron Ochs Der Rosenkavalier.

His concert repertoire includes Elgar Caractacus and The Dream of Gerontius, Mahler Symphony No. 8, Mozart Requiem, Rossini Stabat Mater, Shostakovich Symphony No.14 and Verdi Requiem, as well as Stravinsky’s Les Noces with the Michael Clark Dance Company at the Barbican Centre and New York’s Lincoln Center.

Engagements in 2021 / 2022 included his debut with Garsington Opera at Wormsley as The Police Commissary Der Rosenkavalier (broadcast on BBC Radio 3 and Opera Vision), Prince Gremin Eugene Onegin for West Green House Opera and a return to the Metropolitan Opera for Brett Dean’s Hamlet.

Engagements for 2022 / 2023 currently include Commendatore Don Giovanni for Saffron Opera Group, Talpa Il tabarro and Simone Gianni Schicchi for Scottish Opera, Hagen Götterdämmerung for Longborough Festival Opera and Verdi Requiem in Marlborough College, as well as a return to the Metropolitan Opera for Lady Macbeth of Mtsensk, Don Carlo and Rigoletto.

“With his dark bass, Julian Close was strong casting as the Police Commissar.”

“…the immensely rich bass voice of Julian Close as Death…”

“…Julian Close’s commanding death, delivered with echoes of the Wagnerian spirit the opera frequently falls back on.”

“Andrés Presno and Julian Close sang sonorously as the two Men in Armour.”

“Julian Close’s delicious bass as Basilio was always a pleasure to hear, and his depiction of the self-absorbed, stuffy music teacher always well observed and gravely humorous.”

“There were some truly outstanding portrayals: Julian Close a sardonic, almost bored Wotan…”

“Julian Close, making his OdM debut as Fasolt, is fantastic, his voice rich, resonant and deep.”

“Julian Close, a habitual Hagen and Fafner, was making his debut as Wotan, and it was a stunner. His huge, black mable voice ruled the platform and had an edge like a spear. Every word was effortlessly audible. Already this was an assumption with godlike authority. This could be one of the Wotans of tomorrow.”

“His deep voice was extraordinarily handsome, and the abiding decency of the character he created – and his obvious engagement with the King’s innate decency – elicited sympathy for Marke’s despair.
The tenderness Close brought to describing Isolde as ‘Dies wundervolle Weib’ was heartbreaking and throughout he gave an immensely moving and dignified performance.”

“Julian Close’s burnished, brilliantly executed Hagen touched on the tragic dislocation of this character from the human world he has been forced to inhabit; unlike Siegmund, Hagen is fully aware of his role as a mercenary of Fate, and lives a life of unremitting, calculated cruelty, devoid of love even from the father who engendered him so callously. Close gave us some interesting hints of the pathos of Hagen’s inner desolation, whether bristling with aggression or smiling with dead-eyed determination, his thrillingly expressive bass both rich and clear throughout.”

“Another standout is Julian Close as Fasolt…”

“As the Banker, Julian Close made an unforgettable impression with his sonorous bass.”

“In the small roles of the Theatre Manager and Banker, Julian Close made a notable Met debut, showing a strong dark voice.”