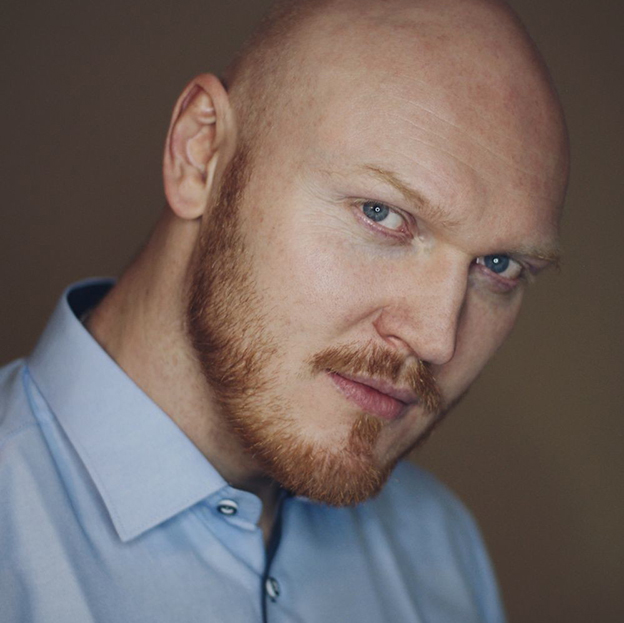 Born in Poland, Lukas Jakobski studied at the Royal College of Music, and was a member of the Jette Parker Young Artist Programme at the Royal Opera House, Covent Garden, where his roles included Angelotti Tosca, Pietro Simon Boccanegra (performances now available on DVD) and The King Aïda.  He has returned to sing Greek Captain Les Troyens, Don Profondo Il viaggio a Reims, Pistol Falstaff and, most recently, Dr Grenvil La traviata.

Lukas Jakobski has performed widely in concert, his engagements including Nettuno / Antinoo / Il Tempo Il ritorno d’Ulisse with the Academy of Ancient Music, Panthée / Narbal Les Troyens and Herald Otello with the London Symphony Orchestra, Pistol Falstaff with the City of Birmingham Symphony Orchestra, Messiah with the Irish Baroque Orchestra, the Nederlandse Reisopera and the Turku Philharmonic Orchestra, Solomon with the Kymi Sinfonietta and Pulcinella with the Ulster Orchestra.

Recent engagements have included Enrico Anna Bolena and The Commendatore Don Giovanni for Longborough Festival Opera, Dziemba in Moniuszko’s Halka and Leuthold Guillaume Tell at the Theater an der Wien, Sarastro The Magic Flute for Irish National Opera, Pistola Falstaff for Grange Park Opera, the St John Passion with the Rotterdam Philharmonic Orchestra, Messiah with the Hallé and Café Müller with the Pina Bausch Dance Company.

Lukas Jakobski sang Polyphemus Acis and Galatea and Commendatore Don Giovanni for the 2021 Dorset Opera Festival and his current engagement include a return to the Theater an der Wien to sing further performances as Hobson Peter Grimes and Varlaam Boris Godunov at the Teatr Wielki, Opera Nardowa.

“Lukas Jakobski as Hobson demonstrates the brilliance and power of his voice with a strong stage presence and good diction too.”

“Lukas Jakobski is luxury casting as Hobson the Carter.”

“Lukas Jakobski was a resonant Abbot.”

“The best of the singing, from Lukas Jakobski as the Abbot who summons the audience to watch his monks enact the drama, is imposingly fine.”

“I loved the glee with which the all-male cast, led by the riveting James Gilchrist and the giant bass of Lukas Jakobski, threw themselves into these mini operas…such exciting singing…”

“Jakobski played Henry with chilling detachment – face twisting with curdled entitlement as he sees his will thwarted, then nervously buttoning up his blazer as his morality is challenged. His voice, soft-grained at first, grew throughout the performance into a force of quiet terror…”

“…just as the throne dominates the stage, so too did bass Lukas Jakobski loom over the cast as Enrico (Henry VIII). Physically, Jakobski is an extremely imposing figure, towering over everyone else (indeed, he must have been several feet taller than his petite Jane) and deploying his muscular physique to threatening effect. His Enrico was no elegant, appealing seducer, but a brutish tyrant for whom ‘might is right’. Perhaps he descended into parody once or twice – there was a look of almost pantomime villainy at the end of the first act – but it was a convincing performance on the whole, and his look of discomfort, physically almost shrivelling as his regal perfection was torn down by Anne was deftly portrayed. Vocally Jakobski was equally commanding, insidiously mellow at times and hectoring to the point of a bellow at others. It made for a gripping performance.

“Lukas Jakobski is a class act as Enrico.”

“The bass Lukas Jakobski made Polyphemus a nasty piece of work, a threatening presence vocally and physically.”

“Lukas Jakobski was a tower of strength with the Irish Baroque Orchestra.”

“Lukas Jakobski stamped himself upon the part from every possible angle. There was his voice, cavernous and emphatic; his significant height (he’s as tall as The Shard); his glaring red tie. Startling gestures too: I won’t forget him lounging malevolently in his chair, dismissing the Angel’s Easter news with a slow handclap.”

“Orfeo sang his heart out against the adamantine power of Caronte, splendidly sung and acted by the tall, imposing Polish bass Lukas Jakobski…”

“Jakobski demonstrated impressive diversity: he roared and bellowed as Nettuno, but was sweet-toned and beguiling as one of the suitors, Antinoo.”

“…a stony-faced Lukas Jakobski is a Commendatore with plenty of gravitas.”

“Lukas Jakobski a genuinely imposing statue of the Commendatore slain by Giovanni – and the most convincing of all the male participants.”

“…so strong is Lukas Jakobski’s bass and so chilling his performance.”

Lukas Jakobski’s hulking, bullying Cassandro thundered around the stage in the first act, and was played so well that his superb drunken turn in the second act came as quite a surprise. Vocally, his bass is a hefty instrument with cherry-dark tones at the bottom of the voice.”

“Lukas Jakobski enjoyed himself as the self-satisfied and initially reluctant would-be seducer, Don Cassandro. His dark, resonant bass was the perfect fit for Cassandro’s ham-fisted egoism…”

The Cook: The Love of Three Oranges / Netherlands Opera

“As the cook, Lukas Jakobski knows how, by turn, sublimely to resist or seduce…”

“A starring role was played by the Polish bass Lukas Jakobski, who played the cook. He delivered a wonderful depiction of the required comic element in this opera.”

“Alasdair Elliott’s Bardolph and Lukas Jakobski’s Pistol were a loveable pair of rogues who might have stepped straight from the pages of Henry IV.”
Music OMH

“The Bardolfo of Alastair Elliott and the tall, sullen delinquent Pistola of Lukas Jakobski made an irresistible pair.”

“Both individually and as a double act, Alistair Elliot and Lukas Jakobski are priceless as Bardolph and Pistol…”

“Alasdair Elliot and Lukas Jakobski make an effective ‘Little and Large’ pair of bald reprobates as Bardolph and Pistol.”