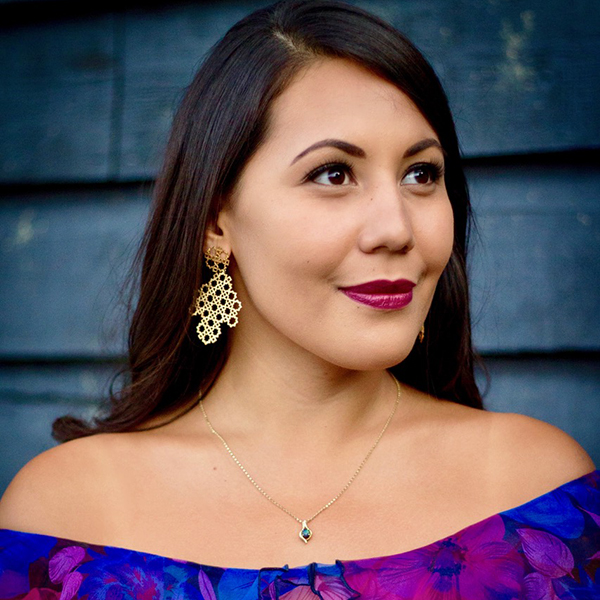 Winner of a Leonard Ingrams Award and the Joan Sutherland and Richard Bonynge Bel Canto Award, New Zealand born Samoan soprano Marlena Devoe also won the Richard Bonynge Award and the Tait Memorial Prize. She was a 2018 Alvarez Artist at Garsington Opera at Wormsley, where she made her debut as Alice Ford Falstaff.

Marlena Devoe completed her MA in Advanced Vocal Studies with Distinction at the Wales International Academy of Voice, studying with Nuccia Focile and Dennis O’Neill.  Prior to her studies in Cardiff, she studied at the University of Auckland, with a degree in Italian and German. Following a language exchange programme in Florence, she studied at the Manhatten School of Music in New York.

Recent engagements have included Mimì La bohème for New Zealand Opera, Oxford Opera, and for further performances with Lyric Opera, Dublin, an Opera Gala with Clonter Opera, Beethoven Symphony No. 9 with the Orion Orchestra at Cadogan Hall, Messiah with the New Zealand Symphony Orchestra, Verdi Requiem at the Snape Maltings and Classical Favourites with the Roman River Festival Orchestra.

Her current engagements include First Nymph Rusalka for Garsington Opera (also at the Edinburgh Festival) and Pamina The Magic Flute for Oxford Opera.

“Marlena Devoe looked almost Ava-Gardner-like as Adina and produced a linear, seraphic sound that went excitingly into overdrive above the stave.”

“Devoe is fresh from winning the Joan Sutherland and Richard Bonynge Bel Canto Awards in Sydney and she certainly demonstrated her natural aptitude for bel canto style here. “Regnaza nel silenzio” showed off her ability to sculpt a long phrase and the ensuing cabaletta gave us some nigh-perfect passagework. Devoe’s is a pleasing lyric soprano that gains in amplitude as it gets higher; the final high phrases of “Quando rapita” were as magnificently gleaming and immaculately poised as any I’ve heard…“

“Marlena Devoe, fearless in her coloratura, was an affecting Lucia.”

“Samoan-born Marlena Devoe presents the fragile figure of the consumptive heroine with positive conviction. Her clear soprano range may be delicately expressive but it also shows a depth of purpose when need be.”

“The team of admirable young singers was headed by the excellent Marlena Devoe, a New Zealand winner of the Joan Sutherland and Richard Bonynge Bel Canto Award. She proved a most appealing Mimì…”

“Devoe’s Mimì was sweet and appealing in character but with a surprisingly large and rich voice that luxuriated in Puccini’s soaring vocal lines. There was an almost-dramatic soprano richness, particularly in the higher register, to the extent that her great third-act plea to Marcello had an extra vivid tragic effect. Some veristic sobs and dives into chest register in this scene made Mimì a more compelling, rounded character than many others do. The many remembrances of phrases past that pervade the final act were taken with a ravishingly soft thread of tone as death approached.”

”Thomas Atkins and Marlena Devoe are memorable as the doomed Rodolfo and Mimi, from their first heart-stopping encounter to Devoe’s moving death scene.“

“Marlena Devoe’s Mimì was a rich and developed character and her singing was moving and, equally importantly, her acting was convincing.”

“Marlena Devoe, an award-winning soprano from New Zealand, was utterly captivating as Mimì, her voice effortlessly strong, sweet and expressive, and she had exactly the right air of appealing vulnerability.”

Ox in a Box

“Her rich melodic tone, never strained, always fluid and focussed, wrapped its way around the hearts and ears of an attentive audience.”

“The key figure, of course, is Violetta, and in Marlena Devoe we have a real star. The show is worth seeing for her alone. Born in New Zealand, the Samoan soprano is absolutely spellbinding from her first entrance, when she advances slowly towards us, like a beautiful model on a walkway. As she comes to a halt, various men, one by one, approach and touch her. She is, after all, a sexy courtesan. Devoe has a real stage presence and a gloriously soaring voice. She seems to deal with the high register and coloratura passages of the heartwarming arias effortlessly and confidently. She is also a consummate “actor, covering the range from flirtatious to despairing. Compelling and convincing.”