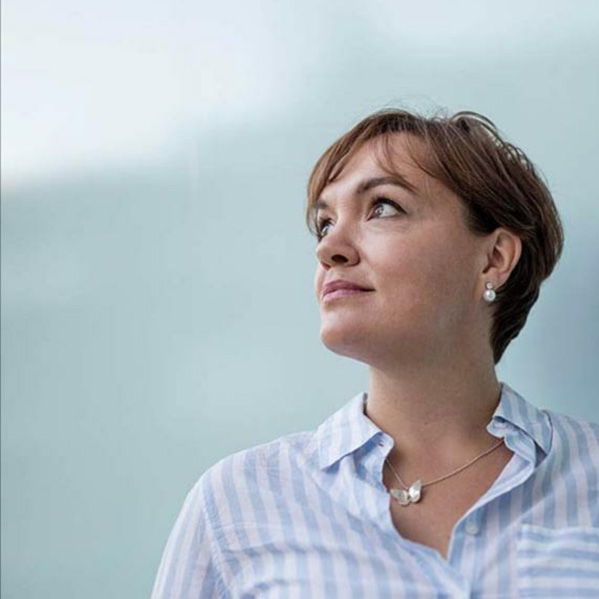 Born in Mid Wales, Rebecca Afonwy-Jones studied at The Guildhall School of Music & Drama & The Royal Conservatoire of Scotland, where she was awarded the Independent Opera Scholarship, The WCOM Allcard Award, The MBF Sybil Tutton Award, became a Samling Artist and graduated with distinction. Whilst at the RCS, she sang Cherubino Le nozze di Figaro, The Composer Ariadne auf Naxos (Rostov State Theatre, Russia), The Muse / Nicklausse Les contes d’Hoffmann and Maria Akhrossimova War and Peace.  She began her career as a Scottish Opera Emerging Artist, making her professional debut in the title role of Carmen.

She made her BBC Proms debut singing Vaughan Williams Serenade to Music with the BBC Scottish Symphony Orchestra conducted by Donald Runnicles, and her concert engagements have further included J. S. Bach Christmas Oratorio, Messiah and Mozart Requiem with the Norwegian Wind Ensemble, Beethoven Symphony No. 9, de Falla The Three Cornered Hat and Mozart Requiem with the Royal Philharmonic Orchestra, The Dream of Gerontius with the RTÉ National Symphony Orchestra, The Dream of Gerontius and Mendelssohn’s arrangement of Israel in Egypt with The Philharmonia Orchestra, Messiah at The Usher Hall, Solomon with the Oxford Bach Choir, Haydn Nelson Mass, Beethoven Mass in C and St John Passion for St Alban’s Choral Society  Mahler Symphony No. 2 at The Bridgewater Hall, Manchester, Mendelssohn Elijah at Birmingham Town Hall, Mozart Mass in C Minor for Nottingham Festival Chorus, Mozart Requiem with Halifax Choral Society and the London Mozart Players, Ravel Schéhérazade for The Sinfonia of Leeds and Verdi Requiem with the City of Glasgow Chorus and at St David’s Cathedral Festival.

She made her debut at the St Magnus International Festival in 2018 and has also appeared at the Fishguard, North Wales, Presteigne and St Endellion Festivals in a wide range of repertoire including Duruflé Requiem, Elgar Sea Pictures and the première of Oliver Tarney’s St Mark Passion. Her contemporary credentials further include the world première of Edward Gregson’s Five Songs of Innocence and Experience, Kerstin in the world premiere of Joseph Phibbs’ Juliana at The Cheltenham Festival and Judith Weir’s The Consolations of Scholarship with the Berkeley Ensemble.

Her recordings include Kerstin in Joseph Phibbs’ Juliana, Messiah with the BBC Singers and the Norwegian Wind Ensemble conducted by David Hill and Hugh Wood’s Beginnings, all now available on Resonus Classics, the latter selected as a Sunday Times CD of the Week, and English Touring Opera’s Focus on Amadigi. For Welsh National Opera, she has recorded ‘Che faro senza Euridice’ from Orfeo ed Euridice and Judith Weir’s The Sleeping-Mat Ballad.

Engagements in 2021 / 2022 included Lucretia The Rape of Lucretia for New Palace Opera, Dardano Amadigi for English Touring Opera, Dorabella Così fan tutte for Saffron Opera Group, the B Minor Mass with Cheltenham Bach Choir, the St Matthew Passion and Macmillan Stabat Mater at the St Endellion Festival, Mendelssohn Die erste Walpurgisnacht and Fanny Hensel Hiob Cantata with the Crouch End Festival Chorus, The Fifth Continent with The Holst Singers at JAM on the Marsh, the premiere of Julian Philips’ Looking West at the Ryedale Festival (with a further performance at the Presteigne Festival) and Vaughan Williams Five Tudor Portraits with Britten Sinfonia.

“St Bega was cleanly, smoothly and spiritually sung by the mezzo Rebecca Afonwy-Jones…”

“Rebecca Afonwy-Jones’ lovely mezzo has depth without darkness, and its warmth made her Dorabella a good foil to her more complicated sister.”

“Rebecca Afonwy-Jones is convincing as the jilted Kerstin…”

“…Rebecca Afonwy-Jones, who reprises the role she created as the jilted and sidelined housekeeper, Kerstin, with biting aplomb.”

“The recording displays young singers of exceptional accomplishment who are a delight to listen to. As Kerstin, Rebecca Afonwy-Jones inhabits her role with a remarkable interiority, her sumptuous mezzo conveying a great deal through subtle variations of timbre. She is the beating heart of the performance.”

“Rebecca Afonwy-Jones as the spurned Dardano…sang and acted with dignity and conviction.”

“Afonwy-Jones, dark voiced and implacable does fine things with the anguished ‘Pena tiranna,’ one of Handel’s greatest arias.”

“Dardano, is a breeches role, sung by mezzo Rebecca Afonwy-Jones with some amazing low notes which have a lovely timbre.”

“Rebecca Afonwy-Jones sang a lush account of ‘Pena tiranna;” her fruity mezzo is the kind of voice that would have been preferred for the alto lead at the beginning of the English Händel renaissance…”

“Rebecca Afonwy-Jones brings terrific energy to the role of Dardano and, aided by a sombre but beautiful bassoon obligato, movingly communicates his embittered acceptance that Oriana will not be his.”

“Rebecca Afonwy-Jones is a splendidly haughty Countess as she suffers Falco’s ‘doss house’ or inn, and then Poppone’s slurs, skilfully projecting this attitude in the well sustained melismas of her Act 1 aria and the Handelian bravado of her rage aria in the succeeding act.”

“Rebecca Afonwy-Jones’ Carmen was both dark and manipulative, with enough seductive fruitiness in her voice to sustain complete plausibility.”

“Rebecca Afonwy-Jones made a touching and pleasing Anna.”

“Rebecca Afonwy-Jones is a formidable and dark-toned Louhi…”

“Rebecca Afonwy-Jones was a fine Louhi.”

“There was a gentleness and mellowness to Rebecca Afonwy-Jones’ Angel from her entry in Part Two of the oratorio. Hers is a pleasing, sweet voice that sounded at its best when the orchestra was at a low volume. The dialogue with the Soul of Gerontius was sometimes gently consoling and later on, as her voice opened up, morally eloquent. There was a spine-tingling moment as Afonwy-Jones explained about the purifying flame of “Everlasting Love.”
Bachtrack

“Rebecca Afonwy-Jones warms to her task with a touchingly open-hearted simplicity in ‘He shall feed his flock’ and a finely honed reading of ‘He was despised.”

“Rebecca Afonwy-Jones was an appealing Lola, as coldly “innocent” as the role requires.”

“Rebecca Afonwy-Jones imbued Kerstin with a stoic dignity as well as a growing sense of helplessness that was ultimately very touching.”

“Rebecca Afonwy-Jones…rose to the occasion as both anger and the instinct to protect Cio-Cio-San expressed themselves in the voice.”

“Rebecca Afonwy-Jones was a superb Suzuki, her rich voice strong in all registers, the phrasing well-judged.”

“Rebecca Afonwy-Jones was pretty much ideal as Orlofsky, firm and spicy of tone…”

“Rebecca Afonwy-Jones dealt with Olga’s tricky tessitura with great assurance, and skillfully managed to make dramatic sense of her ballroom conversion to über-coquette.”

“Thanks to the spirited Rebecca Afonwy-Jones as Flora, the party was full of fizz…”

“Flora’s indigo-blue frock gleams as richly as Rebecca Afonwy-Jones’ mezzo-soprano and as brightly as her smile.”

“Opening proceedings with a splash, Mari Wyn Williams, Rebecca Afonwy-Jones and Katie Stevenson as the Rhinemaidens supplied the kind of vocal substance that will prove invaluable in any well-blended future ensemble of Valkyries.”

There were three alluring sounding Rhinemaidens (Mari Wyn Williams as Woglinde, Rebecca Afonwy-Jones as Wellgunde and Katie Stevenson as Flosshilde)…”

“For the remarkably accomplished Berkeley Ensemble and mezzo-soprano Rebecca Afonwy-Jones it was a tour de force, brilliantly executed by the nine instrumentalists under George Vass’ undemonstratively precise direction and sung / spoken / declaimed (it contains a lot of Sprechstimme) by Afonwy-Jones with remarkable clarity and vocal richness.”

“…it commanded the second half, thanks to the authoritative, gloriously sonorous voice of young mezzo Rebecca Afonwy-Jones and the Berkeley’s responsive ensemble. If anything, the instrumental writing is more potent than the vocal line but when Afonwy-Jones was given words to sing rather than speak she sliced laser-like through the scoring and her voice soared.”