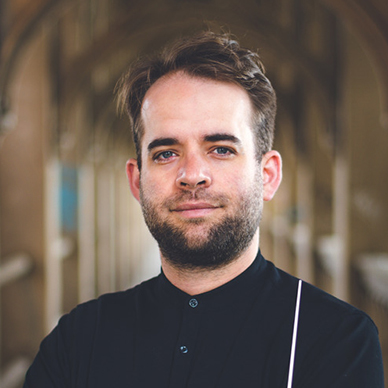 Born in Kingston, British conductor Timothy Burke is emerging as an exciting talent amongst the younger generation of conductors, gaining a reputation for expressive and vivid interpretations across a wide range of repertoire.

He learned violin and piano from an early age, sang as a Choral Scholar at HM Chapel Royal, Hampton Court Palace, and read Music at Exeter College, Oxford, before training as a repetiteur at Guildhall School of Music and Drama, and winning the Sir Henry Richardson Scholarship to study at the National Opera Studio. He went on to join the Jette Parker Young Artists Programme at the Royal Opera House, Covent Garden, before working as Chorus Master at Opera North.

A passionate believer in the importance of new writing, he has, since 2013, been the Music Director at Tête à Tête, producer of the world’s largest festival of new opera, where he has premièred eleven new commissions, including Kerry Andrew’s Dart’s Love, winner of the Stage Works category of the British Composer Awards 2014.

His work on the concert platform has included The Night Before Christmas and Rachmaninov’s Vespers at the Howard Assembly Room in Leeds, St Nicolas, Messiah (excerpts) and Der Ring des Nibelungen (excerpts) with the Orchestra of Opera North, the Opening Gala of the Bradfield Arts Festival 2015 with members of the Orchestra of the Royal Opera House, the 2017 Summer Prom with the Royal Northern Sinfonia and Opera Classics, Summer Classics with the Orchestra of Welsh National Opera, the Great Song of the North with Music Co-OPERAtive Scotland and RNS @ Minimal (Music by John Adams, Philip Glass and Michael Nyman) with the Royal Northern Sinfonia.

His recent engagements have included Jules Maxwell’s The Lost Thing for the Royal Opera, London, Il barbiere di Siviglia for Lyric Opera, Dublin, Pierrot Lunaire for the Manchester Collective, The Gondoliers and The Yeomen of the Guard for the National Gilbert and Sullivan Company, Will Todd’s Wonderland Restored for Opera North’s Big Sing, The Emperor of Atlantis for Bold Tendencies and Façade with the Royal Northern Sinfonia.

Timothy Burke was appointed Chorus Director for the Chorus of Royal Northern Sinfonia in May 2020.

During lockdown, he was responsible for the Royal Northern Sinfonia’s The World How Wide: a choral re-imagining of Vaughan Williams’ Fantasia on a Theme by Thomas Tallis.

“Timothy Burke conducts Robert Clark, James Hendry and Kate Shipway in a crisp performance of Glass’ insistent piano lines, which slide from spiky to hypnotic and back.”
Dancing Times

“Timothy Burke was confident but unobtrusive as the conductor.”

“Timothy Burke kept things moving with plenty of pace and split-second timing where required, but not ignoring the more lyrical moments, eliciting very fine playing from the orchestra.”

“The opera is propelled forward with energetic tempi from the pit, under the baton of Timothy Burke.”

“Musically the performance I attended – with the young conductor Timothy Burke taking over from Stuart Stratford, who was in charge of the rest of the run – was highly persuasive. Burke drew sweeping, impassioned playing from a City of London Sinfonia on fine form, and clearly enjoying itself; the aching nostalgia and powerful vistas of the music came across with power.”

“The orchestra, too, sounds smart, full and generally on point. Credit where it’s due: they’ve got a smashing woodwind section and conductor Timothy Burke set out as he meant to continue, with considerable energy and finesse.”

“Musically there was plenty to enjoy. Timothy Burke conducted a nimble performance, with clean orchestral playing and engaging singing…”

“(Patience) is adorned with one of Sullivan’s prettiest scores, and conductor Timothy Burke does it considerable honour, with a sweet light, touch, deft pacing and a cute way with those self-effacing titivations.”

“Conductor Timothy Burke ensures a generally spritely pace, and the ETO chorus and orchestra are superb.

“The evening speeds by thanks to Timothy Burke’s spirited conducting…”

“…the orchestra is conducted with a nice light touch by Timothy Burke.”

“…conducted with affection by Timothy Burke.”

“…a night of tip-top comedy that’s wrapped in musical splendour by a sparkling company of singers and ETO’s stylish orchestra under Timothy Burke.”

The Yeomen of the Guard / National Gilbert & Sullivan Company

“…there was plenty to cheer about in the performance. One of the its most impressive features was the zestful, well-paced and malleable conducting of Timothy Burke.”

Tell Me the Truth About Love / Streetwise Opera

“…the big set pieces, including renditions of Up Where We Belong and Jimmy Nail’s Big River, were made to soar thanks to tight musical direction from Timothy Burke…”